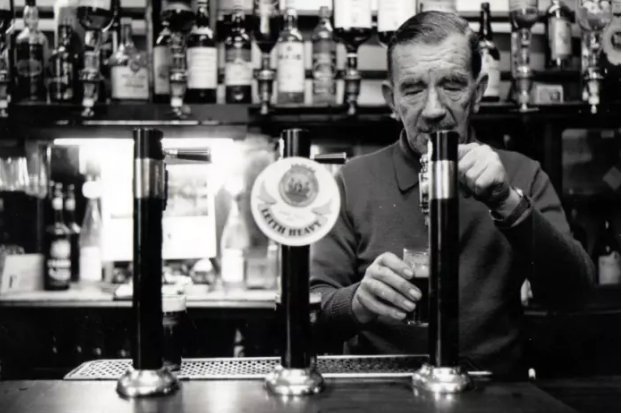 It started with Ian Rankin posting on Twitter. A photo of an article in Scotland on Sunday, written by David Mclean of the Lost Edinburgh Facebook page and showing photos of the Oxford Bar from 1982. Quite why it’s posted by Lost Edinburgh is anyone’s guess – the Oxford isn’t lost. It hasn’t changed a bit except that the tall beer founts are away and, of course, the point of the article, Willie Ross is away. Also lost was the Leith Heavy.

@beathhigh Unimpressive? The cheek. If I can find the recipe, I’m making Leith Heavy.

Some mild searching went on but when Ron Pattinson didn’t know I figured the game was up.

The photos were posted again in April by Avalanche Records and retweeted by Mr Rankin. On that occasion, my query about who made the beer was retweeted and with his 110,000 followers, responses started coming back identifying the short-lived Leith Brewing Company and Ken, ChummeryKen, and, most importantly:

@BrewShedBeers @Beathhigh I've got it. It was Nancy's dad who brewed it.

The most remarkable thing about this is that I’ve known Scobes since some time around 2010 when he was a stalwart of Blipfoto and I was a new member. Edinburgh truly is a village.

Anyway, having met up with Scott last evening, I’m sitting here with the original home brew-sized recipes for the Leith Heavy and the brewing logs for the full 10 barrel brews of the Leith Brewing Company. And much more memorabilia. And there’s more of it to come.

The only thing not specified is the yeast. There’s many mentions of “Yeast from L/Clark” soon abbreviated to “Yeast ex LC” which must refer to the Caledonian brewery (founded in 1869 as the Lorimer and Clark Caledonian Brewery). But this is going to have to be brewed with available yeast so the first batch will be split and three different yeasts used: Wyeast 1728 Scottish yeast, Mangrove Jack’s M15 (called Empire and their recommended yeast for Scottish heavy) and my old standby, Safale S04 because it will always be there.

And unless Scott knows someone who would know the taste of the Leith Heavy, there will just need to be extensive testing to decide which of the three is the better beer.

And there’s the story of Ken to tell. This guy was a character worth knowing.

4 thoughts on “Brewing the Leith Heavy”